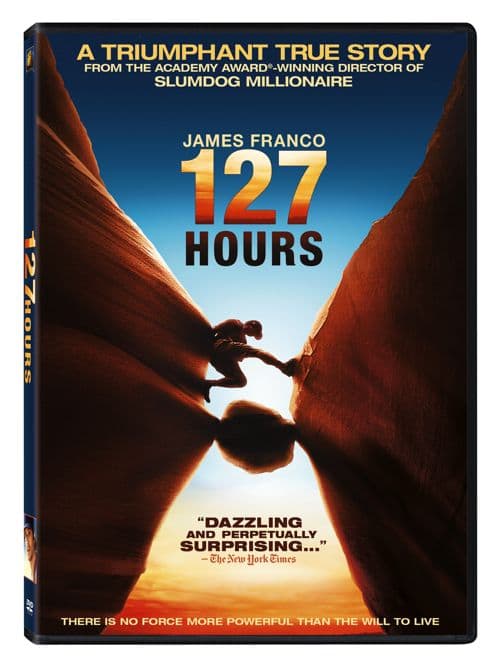 From the Academy Award®-winning director of Slumdog Millionaire, Danny Boyle, and starring James Franco in a “tour de force performance” (Associated Press), comes one of the most “triumphant and enthralling” (Rolling Stone) movies of the year. &nbsp;Nominated for six Academy Awards including Best Picture and Best Actor (Franco), 127 HOURS is an edge-of-your seat cinematic experience that recounts one man’s harrowing story of survival. This “exceptional film” (Wall Street Journal) will be available on Blu-ray Disc and DVD on March 1 from Twentieth Century Fox Home Entertainment.

Based on true events, 127 Hours follows Aron Ralston, a dare-devil outdoorsman who gets trapped under a boulder while canyoneering alone in the Utah mountains. As hours turn into days, Ralston embarks on a personal journey in which he relies on the memories of family and friends – as well as his own courage and ingenuity – to turn adversity into triumph!

The 127 HOURS Blu-ray includes over an hour of extra footage and behind-the-scenes looks at this gripping film. Only on Blu-ray will viewers truly experience the award-winning cinematography in high definition, the way Boyle intended. &nbsp;From sweeping and majestic views of Blue John Canyon to the intimate scenes with Ralston trapped in the crevice, to the intricate weaving of the soundscape of the dessert available in 5.1 DTS HD Lossless surround sound, the Blu-ray format provides the viewer with the highest quality cinematic visual experience possible.