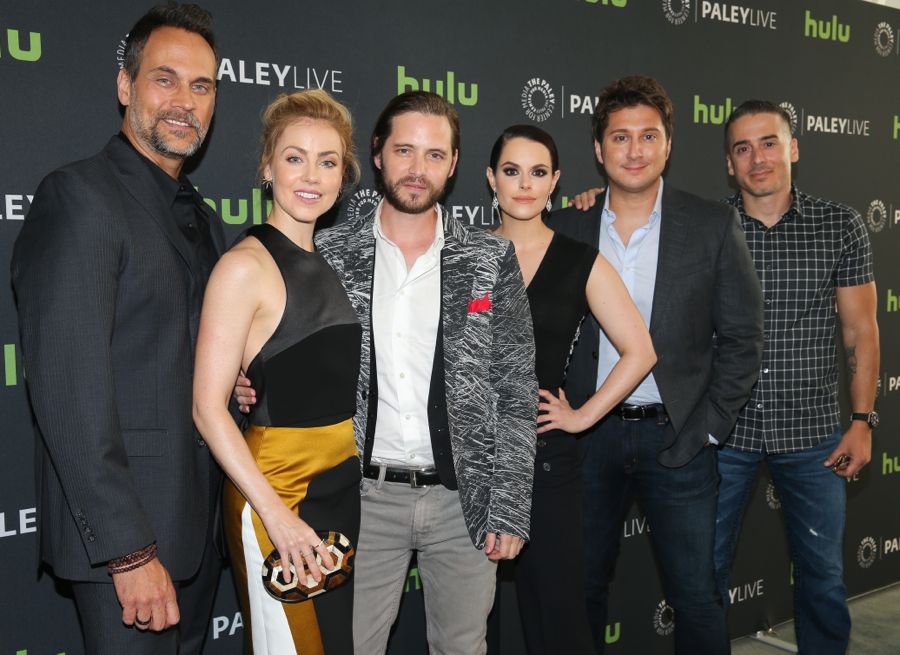 It was a night to remember at the Paley Center for Media in Beverly Hills as the stars of Syfy’s 12 MONKEYS celebrated not only the Season 3 announcement, but also screened the final two episodes of Season 2 for the fans.  With multitudes of red forest foliage sprawling throughout the Paley Center lobby and the giant Army of the 12 Monkeys emblem stamped across the lobby floor, it was clear upon entering that the world of 12 MONKEYS was vibrant and alive.  Champagne in hand and hor d’oeuvres on the side, happy fans and the cast, producers and writers mingled in joyous spirits just before the screening of the last two episodes of Season 2 — a special treat as these lucky few would be seeing the episodes weeks before the rest of the world.

During the red carpet, stars Amanda Schull, Aaron Stanford, Emily Hampshire, Todd Stashwick, Kirk Acevedo along with show creator and executive producer Terry Matalas happily chatted with press about what the Season 2 finale holds in store and their own elated reactions to the Season 3 renewal announcement.

In our exclusive video interview with Amanda Schull, she talks about what potential romantic moments lie ahead for Cassie and Cole (Aaron Stanford), keeping an eye on Olivia (Alisen Down) and the unexpected element of the Cassie and Ramse (Kirk Acevedo) frenemy relationship. Lest the Cassie/Deacon fans dismay, as a special treat, look for a fun hug between Amanda and Todd Stashwick as well during the interview.

In our exclusive video interview with Aaron Stanford, he talks about the unique Cole and Jennifer Goines (Emily Hampshire) friendship and how fans better buckle up for the Season 2 finale.  He also gives the “Casserole” fans a little something to hope for. (Fans will also love the pop in that Aaron makes in Emily’s video interview!)

In our exclusive video interview with Emily Hampshire, she talks more about the Jennifer and Cole friendship, the fun of working with Amanda and teases a future relationship between Jennifer and Deacon. (Yep, you heard that right — Granny and the Scav King — oh my!)

In our exclusive video interview with Todd Stashwick, he talks about Deacon’s Tin Man heart, embracing Deacon’s heroic side and there is an adorable moment as Todd sees Amanda nearby. (Hope you saw that great hug between Todd and Amanda in her video interview!)

In our exclusive video interview with Kirk Acevedo, he talks cheekily about how he, as Ramse, would have killed off Cassie by now and his funny take on the Ramse/Cole bromance and whether that translates off-screen as well.

In our exclusive video interview with Terry Matalas, he talks about preparing for Season 3 and there is a cute pop in by Emily who compliments him on the show’s portrayal of women.  (The love among the cast and producers is clear from all the warm interaction.)

As the celebration did not end there, awesome candid photos from the red carpet and Q&A panel can be seen here:

And more amazing photos from the event provided by the Paley Center’s official photographer can be seen here:

The final two episodes of Syfy’s 12 MONKEYS can be seen on Monday, July 11th and July 18th at 9:00 p.m. on Syfy. Do not miss them. Huge events happen that will blow your minds. Season 3 will not be able to come quickly enough after that!