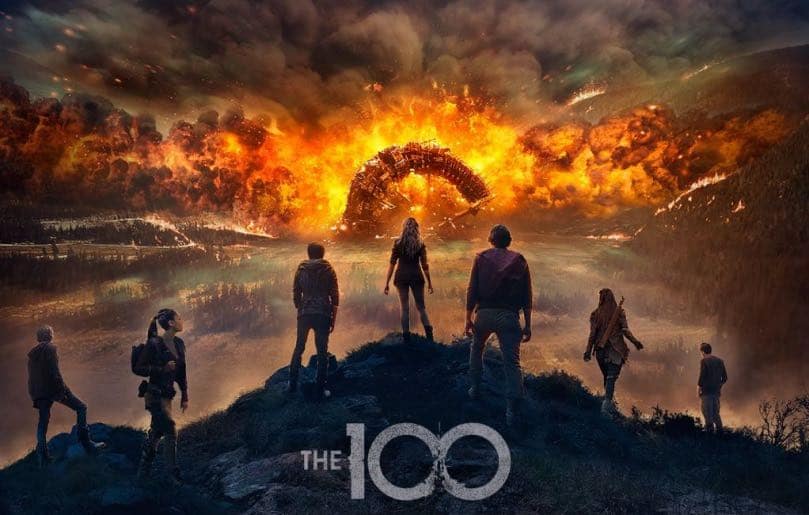 I confess, it took me watching the pilot episode of The 100 two times to recognize its appeal. Upon that, however, I was hooked. And by hooked, I mean, obsessed.

I had binged the first three seasons in a span of two weeks, just in time for the fourth season premiere. I had read the books, cover to cover, multiple times. And considering that I have encountered the majority of the fan fiction on Bellarke (the ship name of main characters Bellamy Blake and Clarke Griffin), that says a great deal.

Now, considering that I am one of the lucky ones who will be meeting the real-life Bellarke (Bob Morley and Eliza Taylor) at the Wizard World Comic Con in Sacramento, California on Saturday, I thought that it would be fun to write a summarized assessment as to why I was turned on to The 100.

Moreover, I just had a knack for writing about The 100.

Allow me to enjoy myself, okay?

The music chosen works perfectly with the show. I must have played “Add It Up” by the Violent Femmes, on repeat, for months!

As Abby Griffin (Paige Turco) had once said, “Maybe there are no good guys”. I think, she could not have been more right.

I do not know about you, but I “geek out” when I recognize actors from other roles/series! The 100 is no exception—there have been a lot of familiar faces throughout the seasons. (To me, at least!)

Henry Ian Cusick, who plays Marcus Kane, was Desmond Hume in Lost. Alessandro Juliani, who had played Jacapo Sinclair, was Felix Gaeta in the rebooted Battlestar Galactica. Kate Vernon and Rekha Sharma (who had played Diana Sydney and Lorelei Tsing, respectively) were both, likewise, BSG alumna—Vernon had played Ellen Tigh, while Sharma had played Tory Foster. Dichen Lachman, who had played Anya, was both Amy Hanamoa in Hawaii Five-0 and Jiaying in Agents of S.H.I.E.L.D. Lastly, Kelly Hu, who had appeared in the pilot episode as Callie Cartwig, was China White in Arrow, Laura Hills in Hawaii Five-0, and Pearl in The Vampire Diaries.

I have been learning how to speak Trigedasleng, since I had first heard of the language on the show. Trigedasleng is probably the most beautiful, and fascinating, constructed language, both created, and known.

Want to learn how to speak and write Trigedasleng? Here is a link to a neat translator tool that I had found: https://lingojam.com/TrigedaslengTranslator.

I love how the world of The 100 continues to expand as more seasons are confirmed. From the Grounders, to the Mountain Men, to the City of Light…it has been one hell of an adventure!

The developments/evolution of each character feel natural and seamless. Each has gone through growth, in one way or the other. One can never guess where the characters’ stories will take them; however, the exceptional writing ensures that you will want to stay put to find out what happens.

Clarke Griffin. Octavia Blake (Marie Avgeropoulos). Raven Reyes (Lindsey Morgan). There is no question that the show’s staple is of the three women aforementioned, as well as countless other women. A case in point: the biggest plots of the show have been driven by/revolves around the women.

Who would not want to watch 100 juvenile delinquents fly down from space to attempt to survive Earth, close to 100 years after one nuclear apocalypse had ravaged the planet? And that is just in the first episode! Much, much more has happened…but, I will leave you to watch, if you have not been already!

As a fan of science fiction, it is no surprise that I fell in love with this show. After films such as Divergent and The Hunger Games, I thought that I would begin to grow tired of stories similar to. (Not that I did not love said films!) On the contrary, I had felt the same way with The Vampire Diaries—I thought that, upon watching Angel and Buffy the Vampire Slayer and Moonlight and Twilight, that I have grown tired of the vampire genre. I was proven wrong, and I can say the same about The 100.

If I were to pick one reason, as to why I fell in love with The 100, Bellarke is my reason. Bellarke is my OTP (One True Pairing), though I do ship other pairings—Abby and Marcus, and Ilian (Chai Hansen)/Lincoln (Ricky Whittle) and Octavia, and Kyle Wick (Steve Talley) and Raven. As showrunner Jason Rothenberg has exclaimed, countless times, the show is about Bellamy and Clarke, be they platonic or romantic. Whatever they are, and will be, their stories are woven into the core story of The 100, and as a shipper, that makes me very happy.

By the way, Bellarke is engaged in the books.

I will leave you with that.